What is the current registration plate system inIreland?

The introduction of the dual registration plate in 2013 was seen as a long-term project for the Motor Industry. The Industry was seeking to shift some activity into the second half of the year to address the serious problem of seasonality in the Motor Industry in Ireland. After many years of campaigning for change a new format was introduced in 2013.  The current format means each year the plate reads the current year1-D-123 and the current year2-D-123
eg 181-D-123 and 182-D-123 and so on.

How seasonal is the Motor Industry?

Prior to 2013 80% of new cars are sold in the first half of the year. 53% in the first quarter but only 6% in the last quarter. At its peak, close to 50,000 people worked in the Motor Industry in Ireland, now that has dropped to 37,000, with the downturn in vehicle sales and the overall economy.

Why is seasonality such a problem?

New car sales have a direct impact on employment; the more cars are sold, the more staff are required to prepare them, sell them, service them etc. Car sales have become even more seasonal in recent years and with that, jobs have too. Many dealers take on extra staff for the busy first quarter of the year but are then forced to let the same staff go in the second half of the year because there is so little activity. Also, with such a front-loading of sales, there is huge financial pressure put on car dealers in the first quarter of the year and cash flow is serious problem. 89% of car dealers make a loss in the last quarter of the year. In addition, with most cars registered in January, there is a backlog at NCT centres at the start of the year.

What is the current format?

Wasn't this all to do with superstition? Fear of the number 13?

No. For 5 years prior the SIMI had been calling on the Government to change the number plate system. It was only in 2013 that the Government decided to bring it in. The number 13 was still on the plate.

Why has the government brought it in, what benefit is it to them?

The Motor Industry is a significant contributor the Exchequer and for every new car sold the Government benefits in tax collected. An increase in sales means increased revenue for the Government. In addition, with more jobs in the industry protected, the Government saves on social welfare payments, PRSI etc to the tune of €23,000 per person.

Will the change affect the trade-in value of my car?

If you purchase a car between January and July with the registration 131 and trade it in some time later there could be greater value placed on a 131 plate than a 13 plate as there will be fewer sold and there will be greater demand in a few years time. If you purchase a car in the second half of the year, it will obviously be valued greater than the 131 car you may have purchased in the first half of the year, as it is newer.

Has the dual plate worked?

The introduction of the dual registration plate in 2013 was seen as a long-term project for the Motor Industry. The Industry was seeking to shift some activity into the second half of the year and expected it would take a number of years for car buyers to embrace. However in reality since its introduction on the 1st of July 2013 there has been a huge interest from the public in the new number plate each year and this has translated into a very strong level of sales during the month and second half of the year.

The figures speak for themselves prior to the introduction of the second registration plate, sales in July 2012 recorded 4,424 new car registrations and in July 2013 sales almost tripled 11,639. In 2012 sales in the second half of the year accounted for 16% as opposed to 31% in 2016. Since 2013 sales for the month of July have increased year on year. 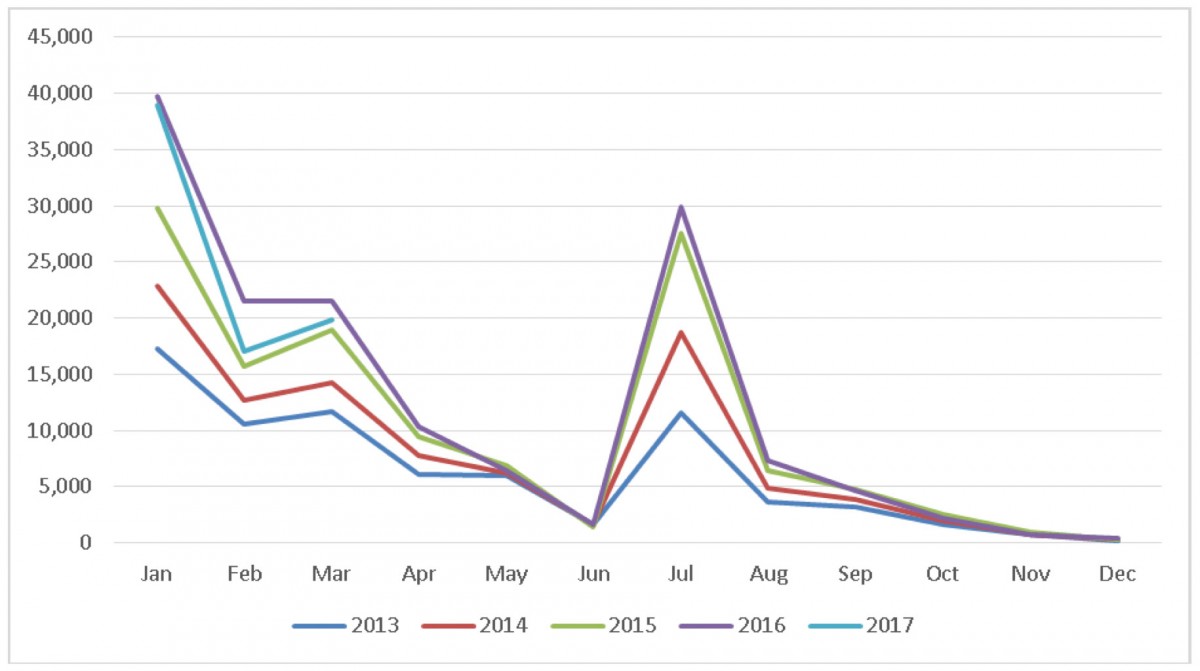