The SIMI Irish Motor Industry Awards in partnership with sponsor Bank of Ireland, took place recently at the Clayton Hotel in Dublin. Oliver Callan, Master of ceremonies announced the accolades in front of over 500 senior Motor Industry figures.

The award winners, adjudicated by an independent panel, operate across all sectors of the Irish Motor Industry. Companies selected demonstrated an award-winning level of excellence and best practice over the last 12 months.

Before their announcement, SIMI President Gillian Fanning, the first female President in the Society’s 100 year history, addressed the audience acknowledging the sense of occasion, which was the first SIMI in-person event in over two years and the start of the Society’s centenary celebrations.

Ms. Fanning remarked on the unprecedented times that the Industry is facing, a global pandemic, a climate crisis, Brexit, rising inflation, global supply issues and the recent outbreak of war. The crystallisation of all these factors has made business extremely difficult over the past few years and this is unlikely to change in the near future. She acknowledged the efforts of the Industry at the height of the pandemic in adapting their businesses and helping to keep the country moving.

The President praised the companies who were shortlisted for each of the SIMI Motor Industry Award categories.

Ms. Fanning emphasised that the Climate Crisis is the most urgent immediate challenge facing the World and the need for action is now. The Motor Industry globally is investing billions in the development of new technologies to meet climate change objectives and targets, while at a national level, SIMI Distributor and Retail members are already supplying the vehicles to help customers make better environmental decisions. The Society’s recently launched its independent Climate Change report outlining an approach to decarbonisation, the policies required and how the Government can work alongside the industry to create real change and achieve a cleaner national fleet.

The key to action is a behavioural change needed by motorists, politicians and industry leaders. The President called on the Government to deliver the right taxation and incentive framework to optimise emission reductions and to provide consumer confidence, which will eliminate barriers to change, while also providing the Industry with certainty to plan. Referencing a recent nationwide survey by Behaviour & Attitudes of over 1,000 Motorists, carried out for SIMI, the findings demonstrated the lack of perceived clarity around Government grants and subsidies for consumers, with three quarters of those surveyed saying they do not understand the existing information that is publicly available, along with other concerns around affordability and charging infrastructure.

Ms. Fanning stressed the importance of diversity within the sector, particularly in relation to the male/female employee ratio. While Women make up a huge proportion of our customer base, they are significantly under-represented in the industry. She encouraged members to promote diversity and to highlight the career opportunities available, particularly with the rapid transition to Electric Vehicles. She also remarked on the need for training and upskilling technicians, along with the critical and active promotion of Motor Industry Apprenticeships.

In closing, the President remarked, 2022 is a very special year for The Society of the Irish Motor Industry as it’s our Centenary year and that there would be no Society without its members, thanking them for their support.

Derek McDermott Managing Director of Bank of Ireland Finance commented
“It remains a real honour for Bank of Ireland Finance to sponsor the Society of the Irish Motor Industry Awards and to see the progress and agility of Motor Manufacturers and Dealers alike. Customer demands and expectations continue to evolve; producing zero emission vehicles, all be it an incredible technological achievement, is just the start. Customers want to deal with organisations that share their values and are taking the environmental crisis seriously throughout their business processes and products. While challenges remain for the industry, Bank of Ireland Finance will continue to support our Franchise partners and Dealers and we look forward to working with our existing and new brands throughout 2022.” 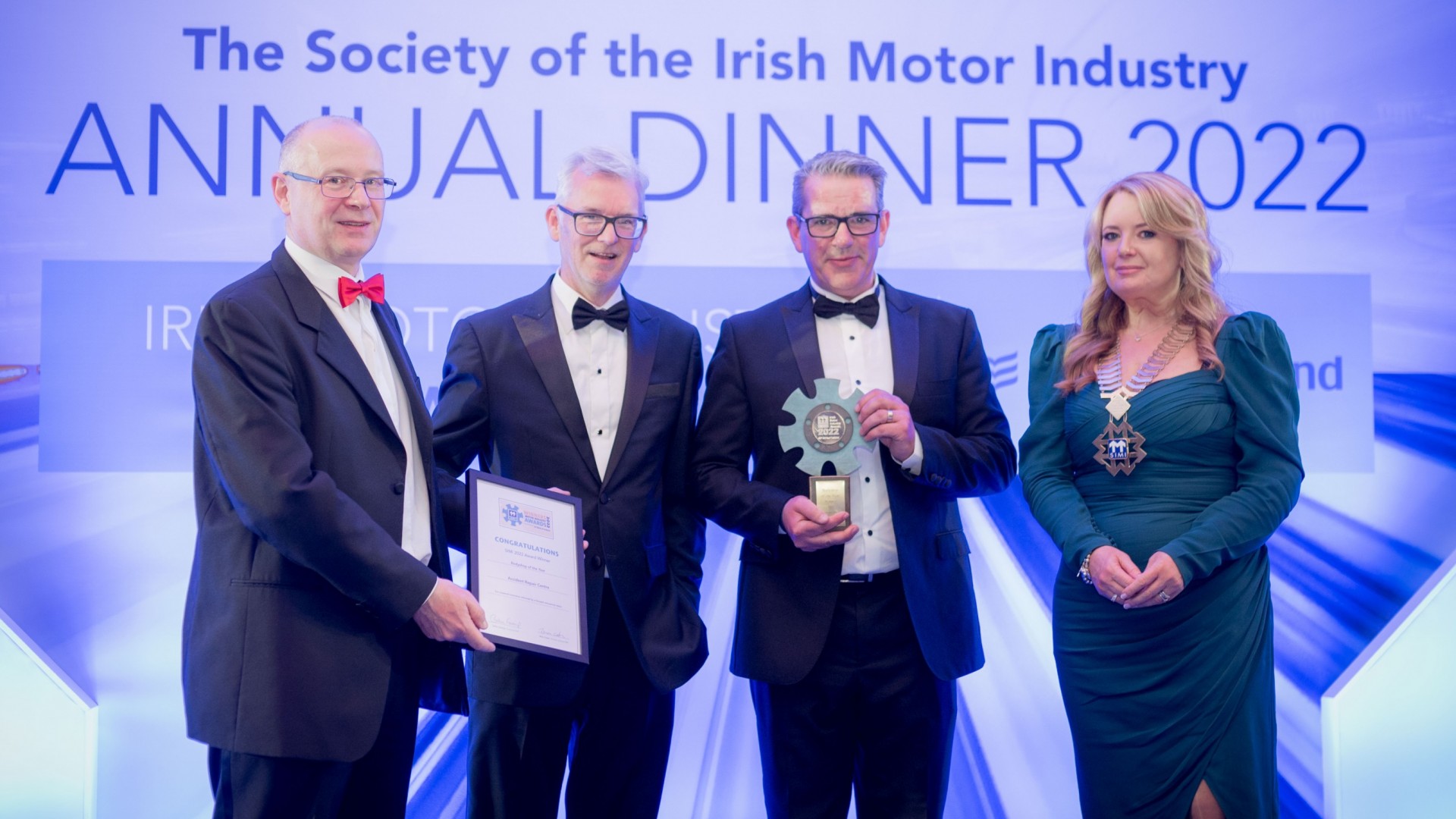 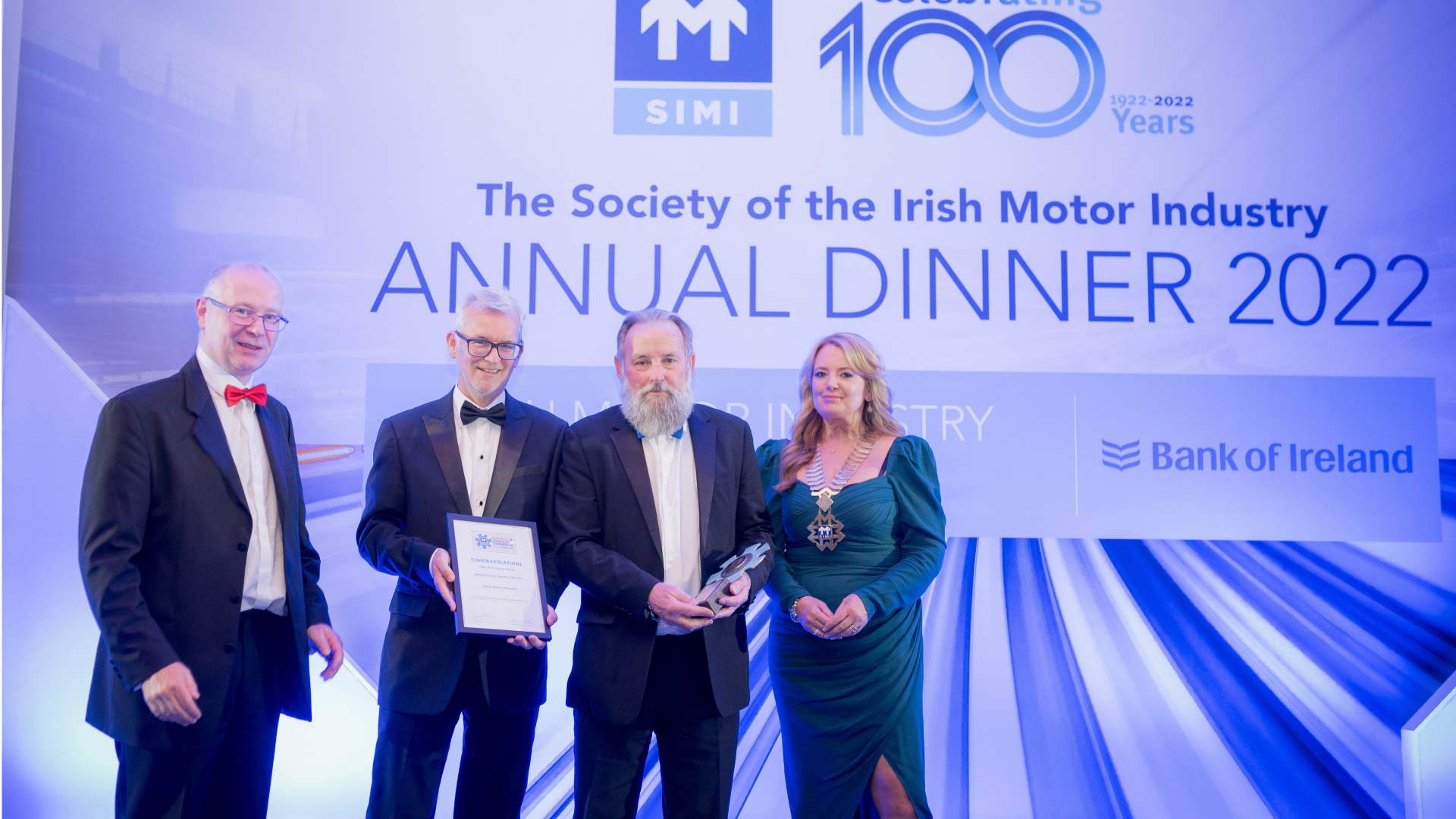 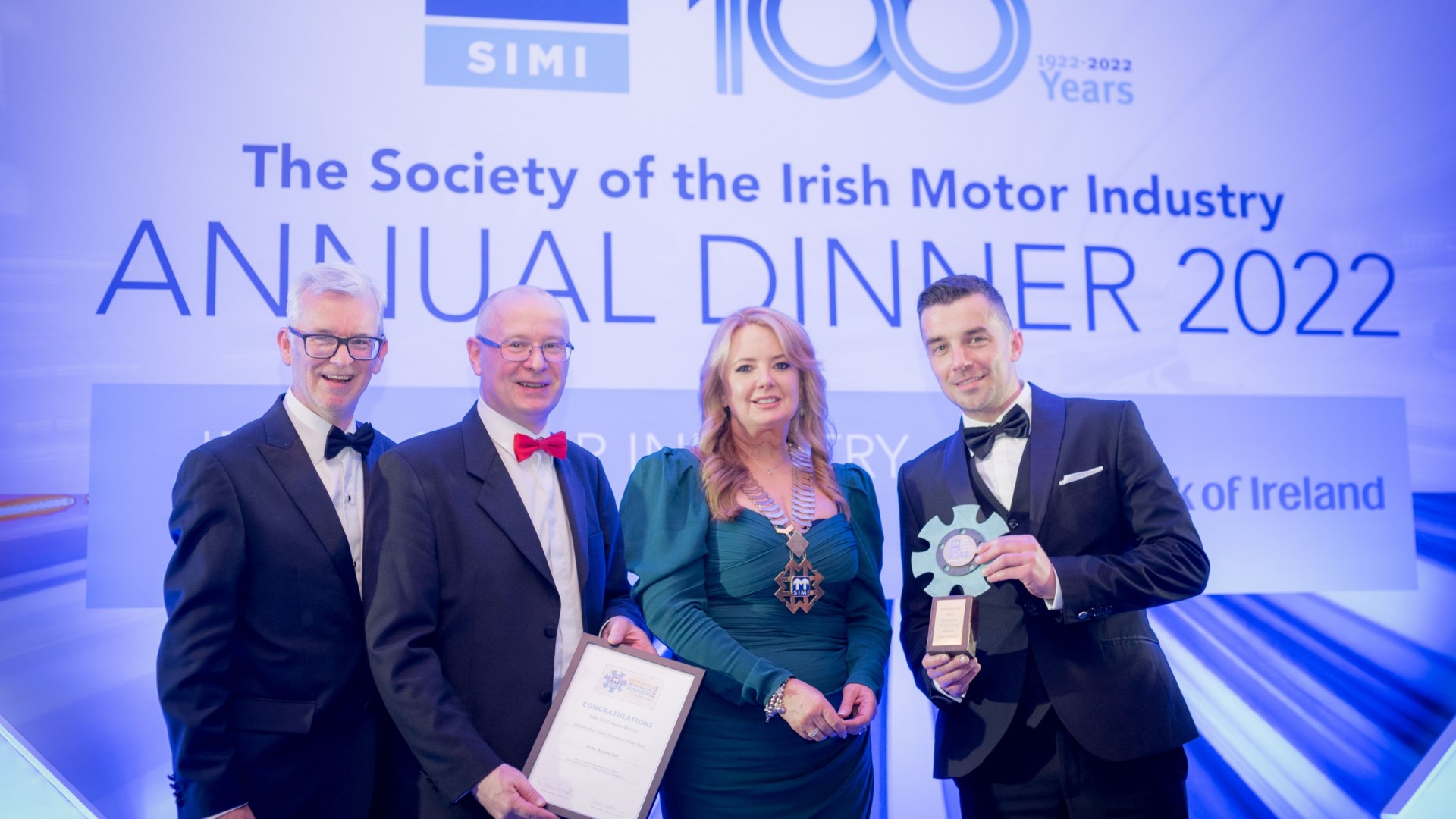 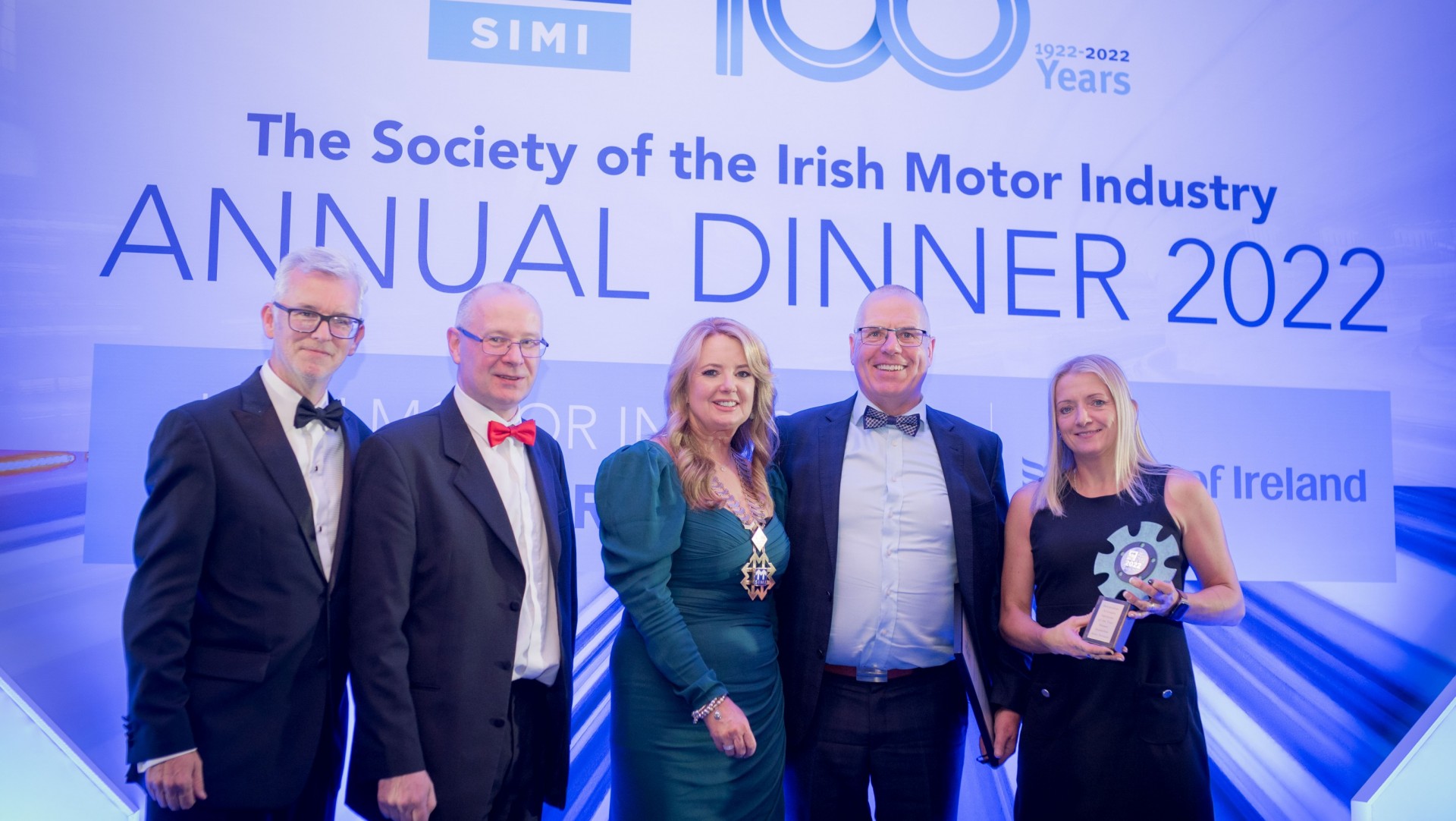 Franchised Aftersales Operation of the Year: Cavanaghs of Charleville Cork 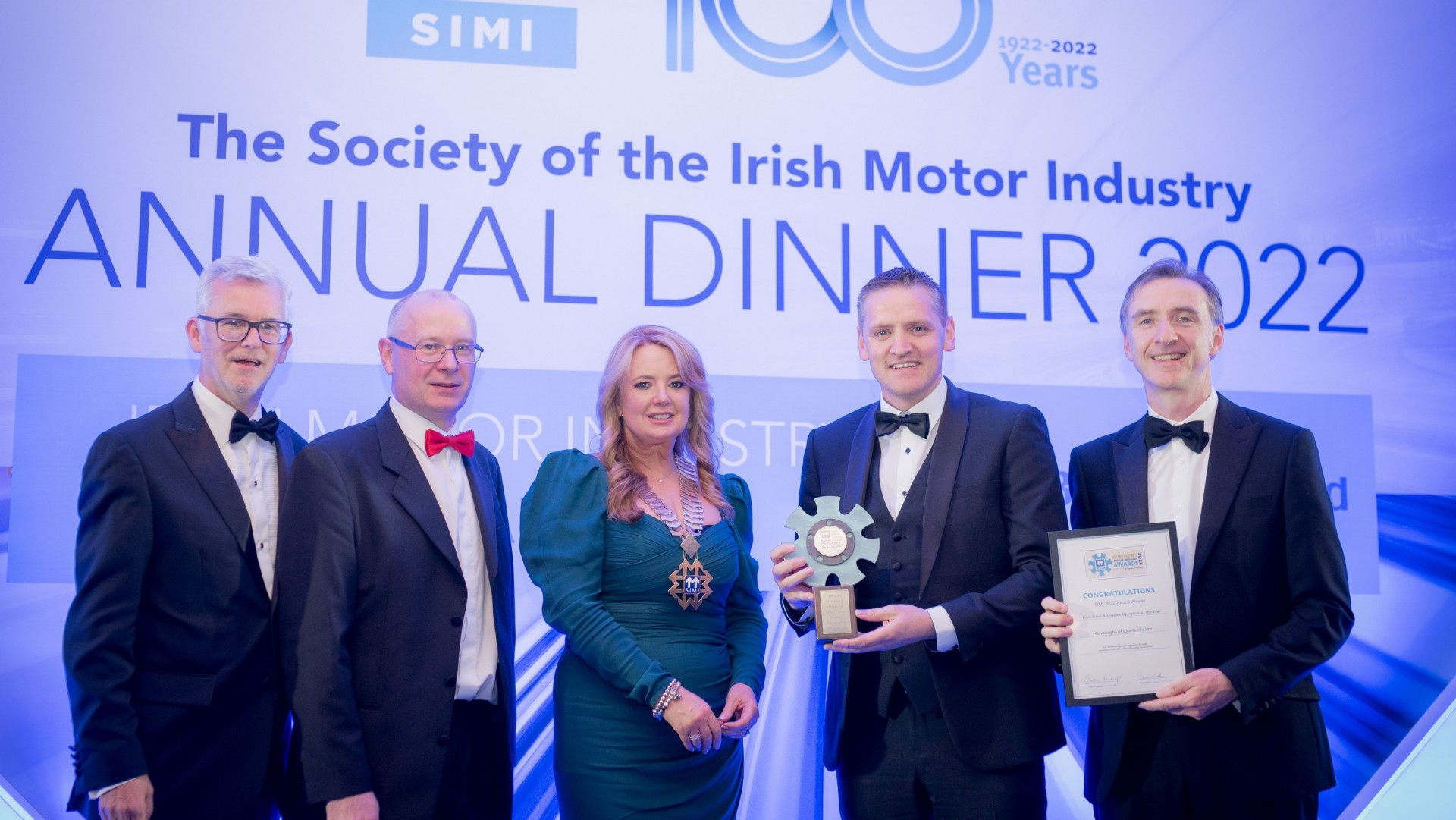 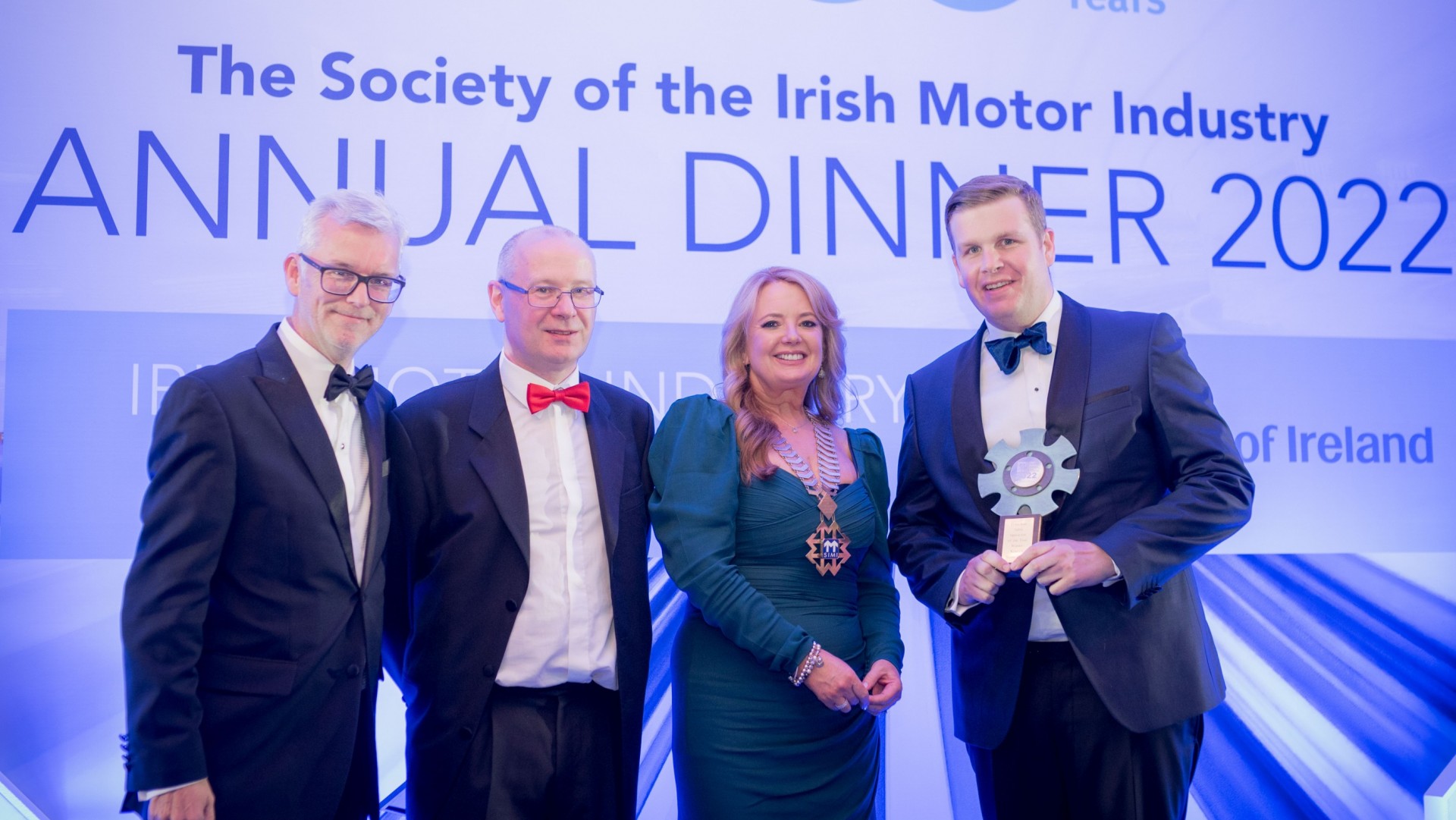 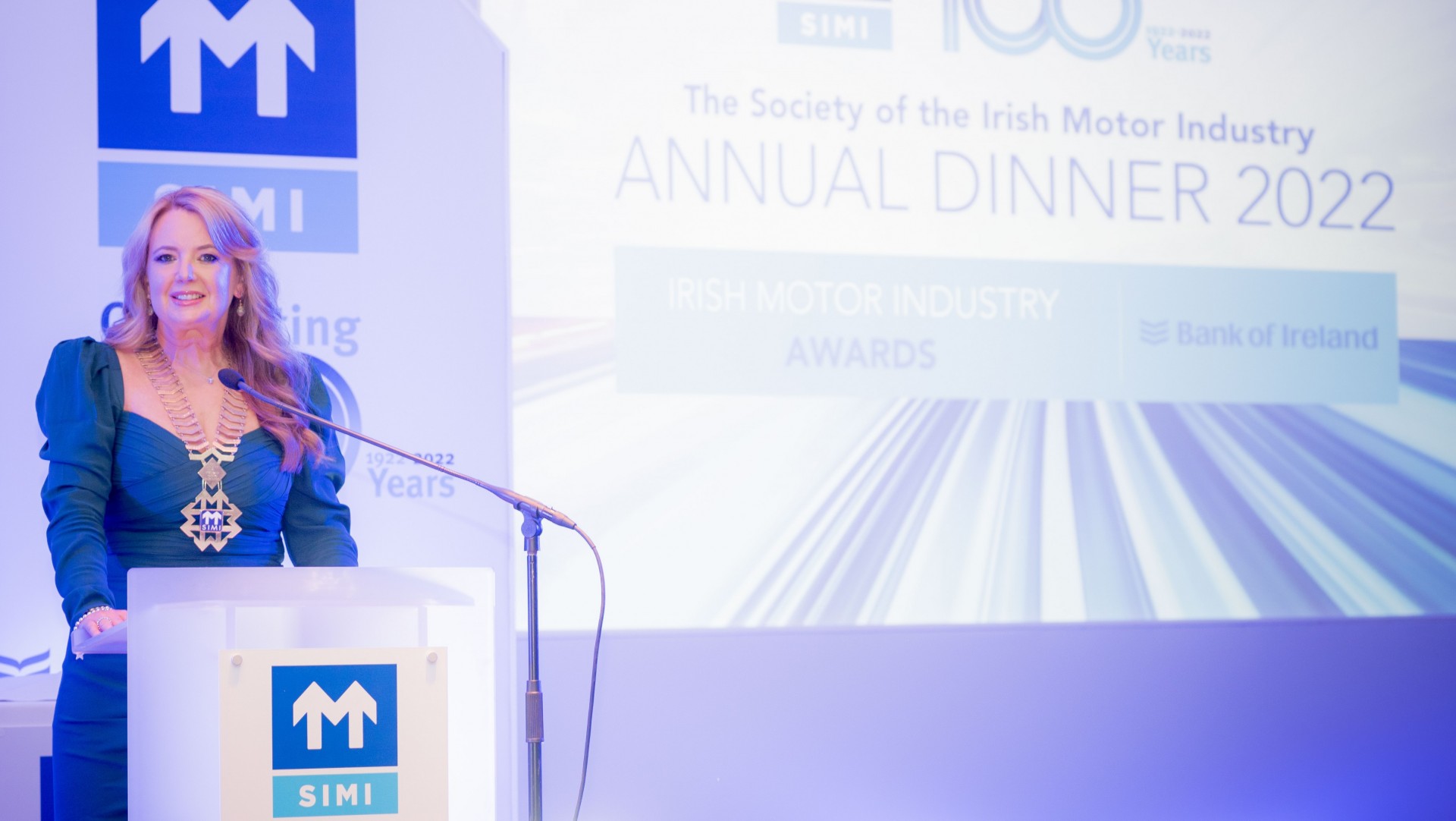